Changing lives with mentors and self-discovery 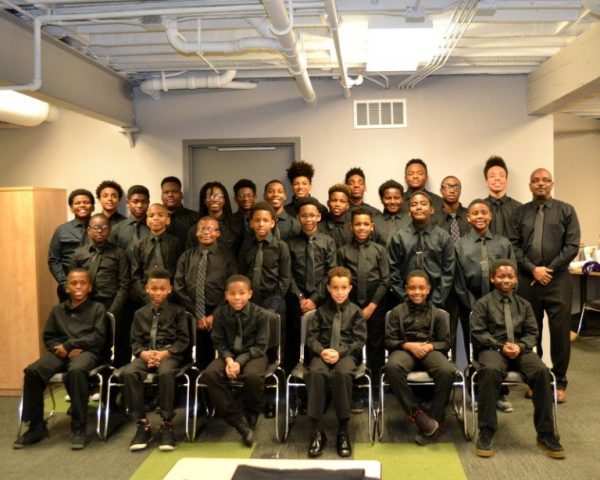 Written by Brandi Phillips – Minnesota Spokesman-Recorder
The Doorstep Foundation, a start-up mentoring group committed to changing the lives of youth in schools and in the community, is the brainchild of Andre “Debonaire” McNeal. “Doorstep Foundation was something that I started way back when I was on KMOJ radio,” McNeal recalls.

“Over the holidays, people would call me and ask me to help provide school clothes, backpacks, school supplies, Christmas toys and winter clothes — things of that nature. The calls had got so regular that it became a little overwhelming.

“One day,” he continues, “when I was on the radio, I said, ‘No matter what, leave it on Debonaire’s Doorstep, and we are going to figure it out.’” He then put out a “public ask” to the radio station’s listening audience. McNeal started receiving calls from listeners saying they wanted to help.

Over the years, McNeal says, “I have done things privately and quietly. I have sent boys to prom and provided supplies for graduation, taking in a homeless teen and another troubled youth over time. As I volunteered for other programs in and around the Twin Cities, in my eyes I saw a gap.”

The name Den Brothers stems from McNeal’s days as an Eagle Scout and Boy Scout. “When we were Cub Scouts, we spent our time in what was called a den. Traditionally, as Black men, we consider ourselves to be brothers. So, I just put the two together and we consider ourselves Den Brothers.” At the Den, he tries to ensure the young men have a safe, fun, nonjudgmental environment where they can express themselves.

The Doorstep Foundation also has a program for young girls: Deb’s Girls. Etosha “Ms. K.” Kemp, a professional at Olson Middle School, suggested that McNeal start a girls’ group. She encouraged McNeal to show the same love to those young girls as he shows to his 15-year-old daughter.

The group could be a support for some of the girls who may not have fathers active in their lives. McNeal’s daughter has become an important part of his social media presence. He documents the ups and downs of loving his daughter by showing the good, the bad and the scary.

While at Olson Middle School working with boys, McNeal recalls a young girl coming up to him asking, “What about us girls? You gotta start working with us girls. Ever since you started working with my brother he has been all nice and stuff.” With encouragement from Ms. Kemp and the student, he agreed to start the group for girls.

Adult mentors come in to speak at group sessions. He tries to get adults who look like the young people he serves. He wants the youth to know that there are people who have gone through the same challenges with histories of bad grades, slow learning, and even bad relationships with parents. This gives the youth a way to identify and then make more wise choices with minimal mistakes. McNeal believes anyone can be a mentor.

To be a mentor, McNeal suggests, “Get involved with your local school, church or community center. Mentoring can be done with just one person. Don’t let lack of money be an obstacle.”

McNeal said he does not have steady funding. He pays for most activities out of his pocket, along with help from the Den Mothers and other community members. He and the Doorstep Foundation are always looking for more adult mentors to be guest speakers or to work directly one-on-one with youth.

Den Brothers North also holds observation days where parents can observe what a Den session is like. Sessions include a meal, homework (McNeal calls it growth work), one-on-one sessions, self-reporting on challenges, group celebrations of individual successes, and guest speakers.

At the end of each day McNeal says he goes to bed knowing “It truly does take a village to raise the village.”

This story was made possible in part by support from the Medtronic Foundation. To get involved, contact andre_mcneal@ymail.com or 612-360-5284.